Where families and friends can meet and play

Forest Park is Everett’s largest park and its second oldest, dating to 1894 when the city purchased two five-acre tracts, miles away from the town center. For years it was a place for picnicking, hunting and fishing in a forest setting close to home. Eighty more acres were purchased in 1909 and 20 more in 1916, extending park boundaries to Puget Sound via Pigeon Creek 1.

Forest Park was officially named in 1913, about the time that the Mukilteo Highway — now Mukilteo Boulevard — opened, dividing the park into upper and lower sections. The uphill portion, lying to the south of the boulevard, is what you will walk in this circular walking tour, which can be entered at any point.

The park’s formative years revolved around a zoo (1914-1976) and a design transformation during the 1930s Great Depression. England-born parks superintendent Oden Hall (1883-1939) conducted one of Washington’s largest Works Progress Administration (WPA) projects, employing hundreds of workers to clear land, build park structures, plant specimen and native trees and build cages for the zoo animals. They also constructed rock walls, some still in place, and built an extensive trail system, a playfield, and Floral Hall, a community exhibition building that opened in 1940 and is now on the National Register of Historic Places. Hall served as parks superintendent from 1919 to 1939 but the Hall family leadership with Everett parks continued until 1972 under Oden’s brother Walter and Walter’s son John.

Over the years, Forest Park has hosted thousands of group events including annual workers picnics, Farm Labor Party gatherings in the early 1900s, flower and garden shows, arts, crafts and music events, an annual Rock and Gem Society show, the African-American Nubian Jam festival, historical displays and programs. For generations the park has been a place where families and friends can meet and play.

Parks maintenance is ongoing, with large renovation projects happening in the 1960s through the 1980s and presently. In 2014 the Washington Department of Natural Resources began a major park cleanup and restoration project, removing invasive English ivy and laurels and planting young trees along Mukilteo Boulevard. Newer trees planted include sequoia, cedar, pine, and vine maple.

You are encouraged to check out Forest Park’s easy and challenging trails, which are not part of this tour. A large sign with a trail map can be found at Point 6.

Transit riders should use the crosswalk with a traffic light on Mukilteo Boulevard to enter the park’s east entrance at Point 1. Everett residents may want to cross the 1993 arch pedestrian bridge from Federal Avenue which exits on Elk Hill Drive, then hike a short trail into the park. Car and bike riders can climb the hill from the east or west entrances to the parking area and begin this circular tour at any point. The tour involves a steep climb and a steep descent but points 3 through 10 are on flat surfaced walkways and roads.

Follow this main road, past a mossy stairway, both leading to the park’s upper area. On the east side of the road (on the left) is an interpretive sign explaining the importance of forest maintenance and the ongoing need for forest recovery programs. The forest recovery sign roughly marks the location of Forest Park Zoo’s bear cage, built when bears were added to the zoo in 1919. Housed in a small, caged area, the bears occasionally escaped. A 1922 news story recounts the... Everett’s Zoo is a large part of Forest Park history, lasting from 1914 to 1976. From a small start of three deer, two coyotes and two pelicans gifted to the city, the zoo grew to more than 200 animals at... Built in 1939-1940 with funds provided in part by the WPA, Floral Hall is a legacy of federal public works in the 1930s Great Depression. Concept for the building came from members of the Snohomish County Gladiolus Society who convinced... A proposed project of Everett City Councilman Carl Gipson (1924-2019), the Swim Center opened in 1975, on the site of the zoo’s Monkey House. It was built first with a removable roof that was replaced in the 1980s with a... Everett Junior College Vocational Carpentry students built this structure in 1961 to serve as a concession stand, following closure of the Forest Park Inn which sold snacks and gifts. The Recreation Department provides information to visitors, organizes and conducts recreational... The picnic shelter is another structure built by the Everett Junior College Vocational Carpentry class, this one completed in the 1960s. Here you will find tennis courts and horseshoe pits. Note a trail entrance east of the shelter. Follow the... 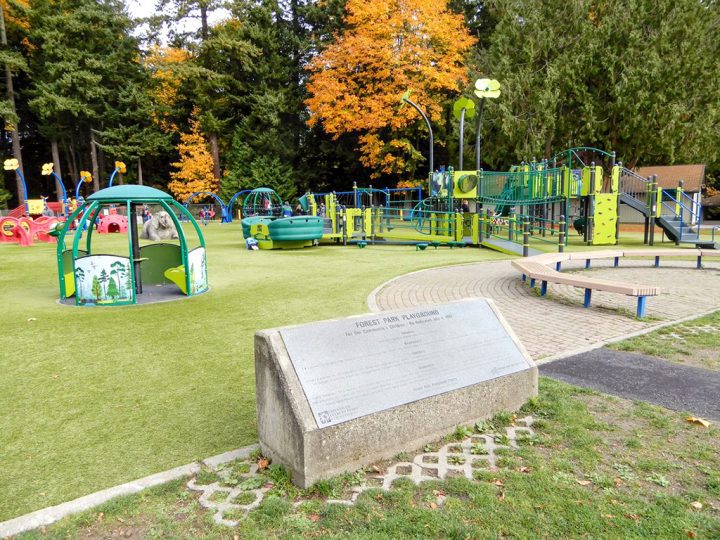 Everett Lions Club sponsored a project to build a children’s wading pool which was dedicated on June 8, 1932. At 75 by 45 feet in size, the pool was considered one of the largest and best constructed playgrounds in the... The picnic area has a long and evolving history as a place for visitors to relax and meet with friends and family. But the area has also been used over the years for arts, music and other cultural events. Note... In 1970 Forest Park began a petting zoo, the Animal Farm, where visitors of all ages could have a closeup experience with rabbits, pigs, ducks, goats, chickens and ponies, with parks staff supervising and offering educational programs. The Animal Farm’s... All three of these modest buildings serve as community meeting halls, available for renting, each with an interesting history. Lions Hall was a repurposed stadium that had once been part of the Deaconess Children’s Home property, south of the park.... Plantings on the hillside south of Mukilteo Boulevard and below the ballfield have retained much of the park’s 1930s design. Trees planted by WPA workers included cedar and pine, with the addition of deciduous specimen trees, laurel and English Ivy.... Here you can look across to lower Forest Park, which is no longer open to the public. During the WPA years, development in this lower park included shrub and brush cleanup, tree planting and weirs along Pigeon Creek 1. Head... Brought to you by HistoryLink

Notice: Trying to access array offset on value of type bool in /nas/content/live/historylink/wp-content/themes/HistorylinkTours-Civ2019/functions.php on line 437

Notice: Trying to access array offset on value of type null in /nas/content/live/historylink/wp-content/themes/HistorylinkTours-Civ2019/functions.php on line 437

This tour made possible with support from